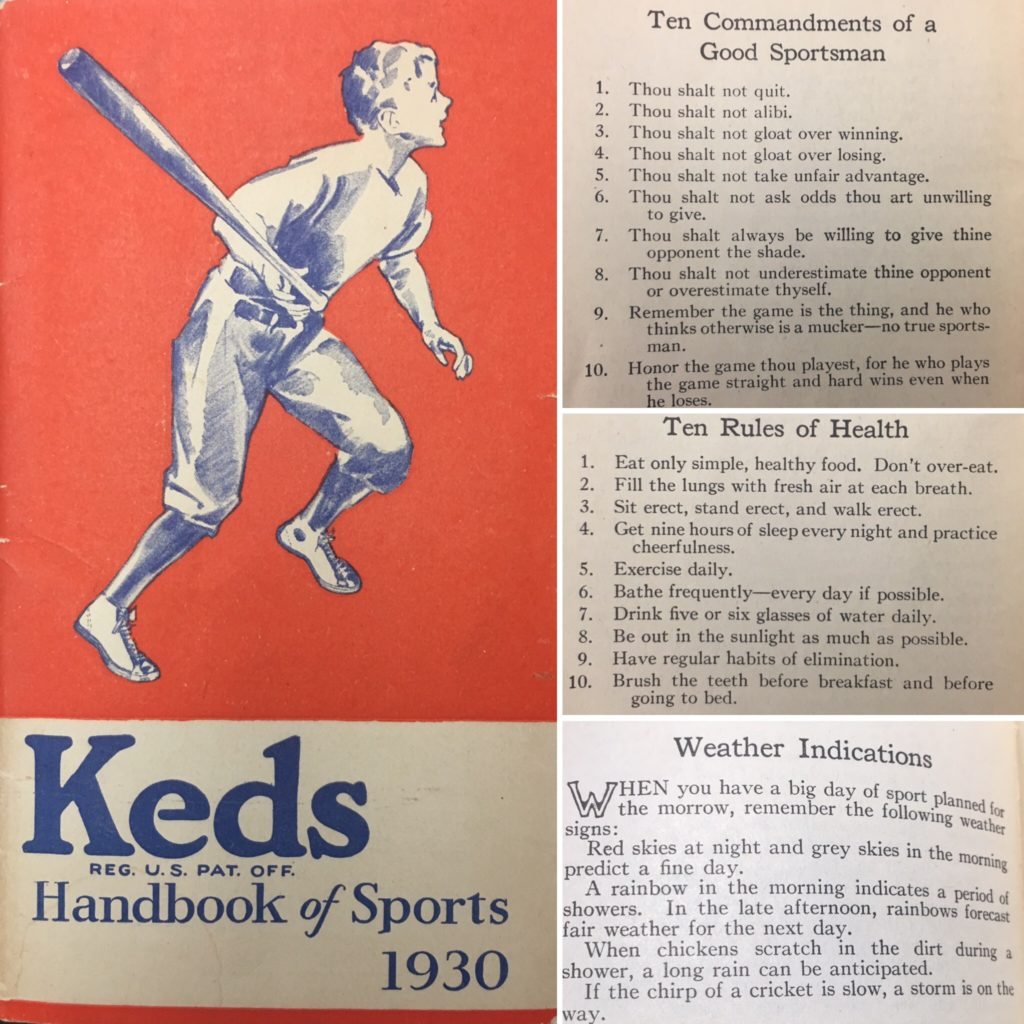 A small booklet published in 1930 by the United States Rubber Company. For a brief rundown of the history of Keds, you can check out Keds - Catalog for 1927.

The booklet outlines various sports and activities. The first few sports are prefaced by a biography/background of a well-known athlete that plays that sport.  The sports covered are (along with athletes and/or variations provided): Baseball (Babe Ruth); Tennis (William Tilden and Helen Wills); Football (Amos Alonzo Stagg); Swimming (John Weismuller); Basketball; Tag Games (11 different varieties!); Handball; Volleyball; Squash Tennis; Horshoe Pitching/Barnyard Golf; Track; Cage Ball Games; Other Fun-Giving Games; Rainy Day Games (which included our personal favorite, the Indoor Track Meet, highlighted by such events as the paper plate throw, the high jump for a piece of candy, the bawl game for who can cry the best, and the cracker race, which awarded first place to the person who could whistle first after eating a cracker).

After the sports sections there are various segments/sections including:

In the middle of the booklet there is an ad for multiple Keds shoes, including a model called the Attaboy. Finally, the booklet ends with four lists, Books Boys Like, Books Girls Like, (remarkably, there isn't a single book that appears on both lists, although both lists are actually quite excellent), Ten Commandments of a Good Sportsman and Ten Rules of Health.

Often the handbook included within it a contest for children to win a fairly significant prize (in 1932 the prize was a Wire Haired Terrier!); the contest in 1930 was outlined on the back outside cover and required the entrant to identify a misspelled word within, then, "Use the word somewhere in a Nursery Rhyme and write the rhyme on a postcard" and mail it in for review, with the best three rhymes (the contest noted that, "neatness will be taken into consideration") receiving a bicycle as a prize for Christmas.

Sneakerature's Take: Booklets like these are abound in nostalgia, rousing memories of simpler times - back when sneaker companies were more concerned with enlightening young folks about how to have fun and compete...it also raises a somewhat crazy, but nonetheless legitimate question: were kids really putting on circuses (circus's? circusi? circi?) back in the 1930's?