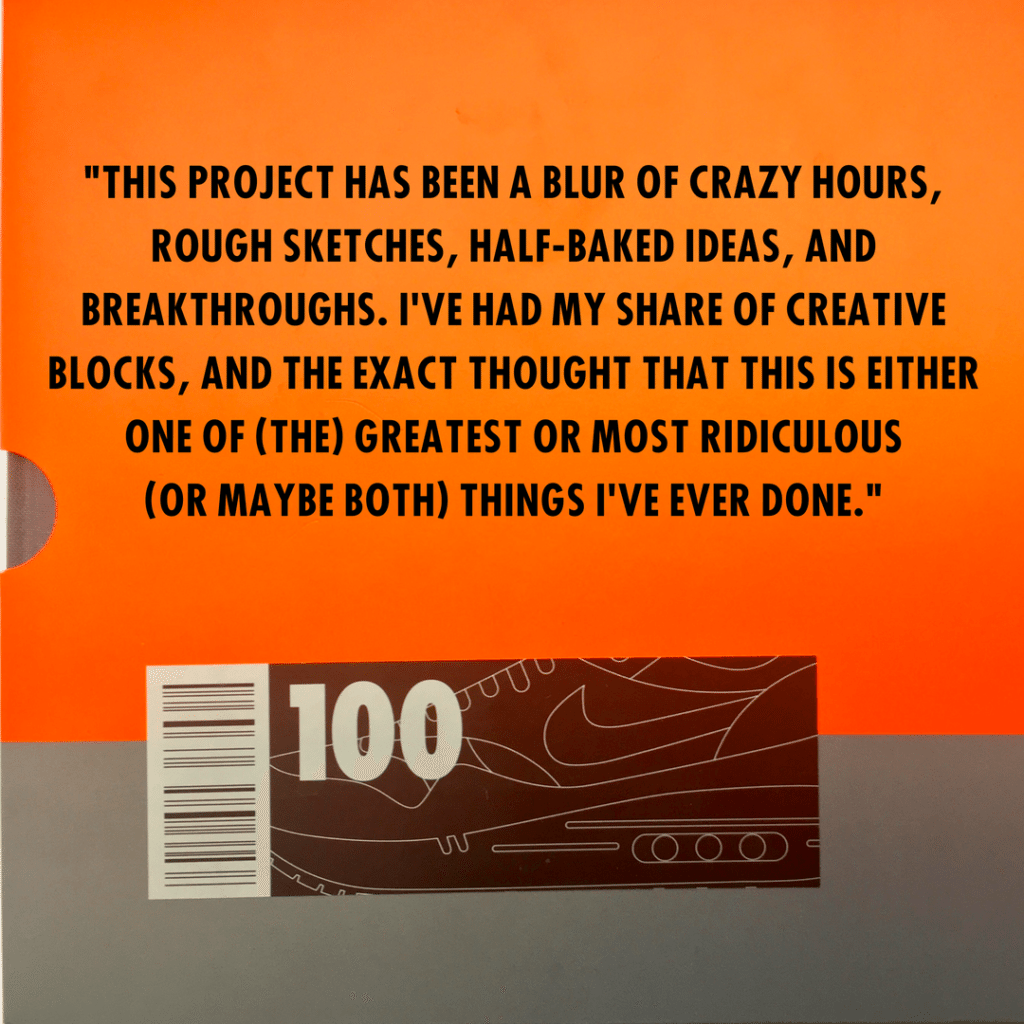 In 2011 Matt Stevens, a self-described “designer, illustrator, speaker and creative tinkerer from North Carolina” launched the MAX100 project on the still relatively fledgling Kickstarter. The campaign had a fundraising goal of $30k that was to be put towards the publishing of his incredibly ambitious, and partially begun project of conceptualizing, designing and illustrating 100 unique interpretations of the legendary Nike Air Max 1.  Matt’s idea to create a book to harbor his creations was, as he so eloquently put it, “either one of (the) greatest or most ridiculous (or maybe both) things I’ve ever done”.  Amazingly, less than a year later MAX100 was published, and those who invested were rewarded with a truly remarkable book.

While there was a limited run of 100 that came with personalized sleeves, the first run of 1,000 came packaged in a sleeve that borrows more than a few design elements from the Nike shoebox, a harbinger of Matt’s ability to imagine, incorporate and execute Nike styling across a litany of subjects, objects and virtually any other grouping that can be described by a word suffixed with ‘-ject’.  The sneaker-cultural significance of this opus was further cemented with an introduction by Sneaker Freaker founder and sneaker literature virtuoso Woody.

You can read more about the MAX100 project, as well as purchase a print of any of the 100 designs here

Eventually 10 of the designs were incorporated into 1 of 1 AM1’s, in conjunction/collaboration with Social Status.

Sneakerature’s Take: Everything about this book is amazing.  That Matt Stevens could envision and execute such a diverse range of subjects within the corpus of an AM1 is, in its own right, incredible. Reading MAX100 is above all else an immersive and interactive experience.  The beauty in his designs impels the reader to view a simple pair of sneakers through 100 different lenses, ranging from the everday (a picnic) to the niche (graphic designers, academics) to the geeky (Star Wars) to the badass (Batman) to the legendary (Steve Jobs, Dr. Seuss) and seemingly everywhere in between. Simply, a masterpiece.