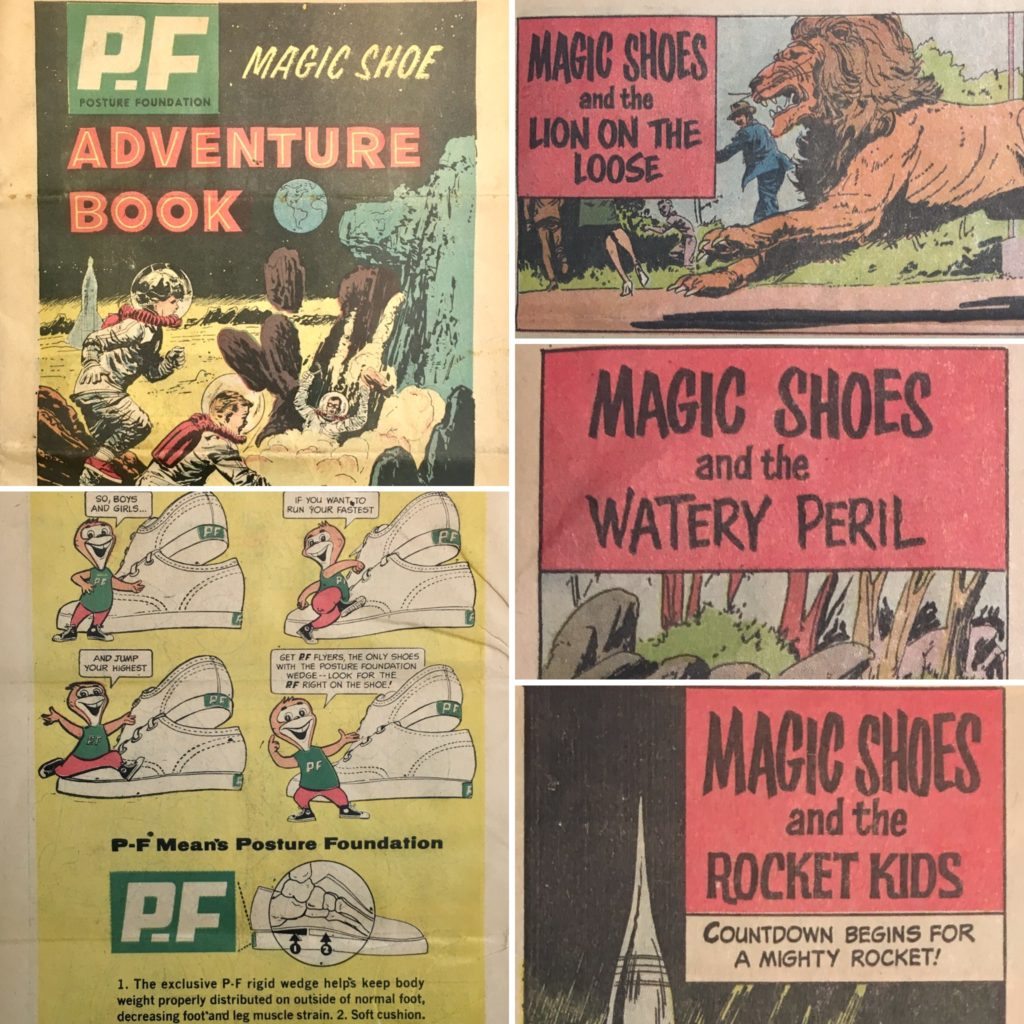 In the 1960’s and 70’s BF Goodrich’s P.F (Posture Foundation) made a significant and successful push to market/advertise to kids.  These efforts included everything from mail-away toys (examples include magnetic circus flyers and a treasure hunt spyglass) to partnering with/sponsoring the Mickey Mouse Club, to store displays with cartoons and graphics aimed at catching a kid’s attention.  One of the cooler promotions they had was a 4-part comic book series, each of the four a one-shot giveaway with the purchase of a pair of P.F Flyers. The comics came trifolded in a small envelope, which is the reason that you will likely never see any of them without at least minor creasing.

The first comic released in 1962, was not actually numbered, although it tends to be know as #0.  It features 3 short stores in which the characters, all children, faced with situations of great peril, don ‘magic shoes’ (obviously P.F Flyers) that have the ‘magic P-F Wedge’ and proceed to save the day.  The first, ‘Magic Shoes and the Rocket Kids’, is a clear reflection on the aspirations of kids in the early 1960’s (with Kennedy telling congress in 1961 they would go to the moon, and John Glenn going to space in February of 1962) telling the story of two kids on the moon who rush to get their family robot to save their father from a deadly moon-rock slide; the second, ‘Magic Shoes and the Lion on the Loose’ tells the story of a boy who had befriended a lion, and coaxes him back into his cage before the guard can shoot him; and finally, the third ‘Magic Shoes and the Watery Peril’ tells the story of young boy who sees a Native American girl trapped in her canoe, hopelessly racing down the rapids without a paddle, and races to save her, thereby earning the title ‘Chief Fleetfoot’ from her father (sidenote: while the father’s fashion choices of a feathered headdress and leather vest sans shirt are a tad bit outdated and racist-chic, his choice of P.F Flyers for footwear is outstanding).

Sneakerature’s Take:  This comic is, for lack of a better way of putting it, really cool. It’s a remarkable snapshot of the aspirations of a young child in the early 1960’s: to go into outer space, to be a lion-tamer, or to be a hero that saves the day.