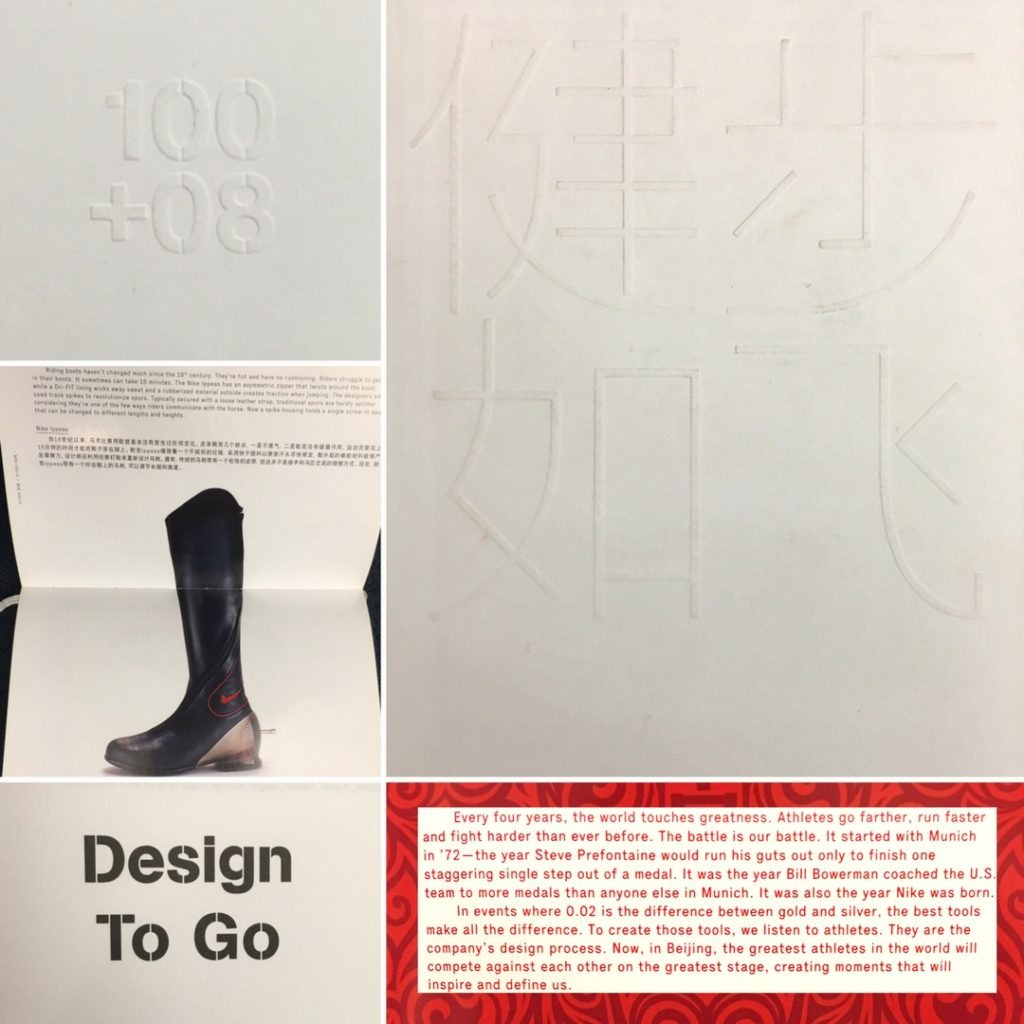 In 2008 Nike partnered with New York based design consultants 2 x 4 to produce an exhibit entitled Nike 100.  Making its debut in Beijing’s 798 arts district in Building 706, the exhibit was designed to celebrate “the history of the Nike brand through 100 quintessential artifacts that embody the unrelenting pursuit of lightness and speed”. It’s opening day, 8/8/2008, coincided with the Beijing Olympics, and was also 88 days before the games began.  As visitors wandered the exhibit, they were provided an ipod that had a loaded audio guidebook on it.  This is the second of two catalogs/books that were created to document the exhibit.

Like the first book, the second, titled “Nike 100+08”, is in both English and Chinese.  Rather than quick one or two page hits about important artifacts for Nike, it examines 8 more topics, technologies and product lines that are each relevant specifically to the Beijing Olympics and the Chinese Olympic team (hence the “+08” in the title).  Included is an in-depth examination of the Lunarlite foam and shoes (with images of 7 different prototypes), the apparel that the Chinese team would wear in 08, all of the specialized sneakers (ever seen a pair of Nike Zoom horse-riding boots?) and a small pamphlet with info about different stores, scenes and maps in Beijing.  This only covers the first half of the book however, as the second half is left entirely blank. Entitled, “Design To Go”, the reader is “invited to draw your inspirations that suggest(s) where the pursuit of Lighter_Higher_Faster_Longer_Further could take us all in the future.” At the bottom of each blank page is a check box next to each of the comparatives, ostensibly for the sketch-artist to indicate which served as inspiration.

Sneakerature’s Take: As with the first one, this beautifully laid out book is home to incredible images (prototypes galore) and anecdotes from the Nike ideation/creation process.  The writing itself however is a little bit off-brand when compared with other Nike books, as the products and technology described read as though they are bending in overall deference towards China and the Chinese athletes.