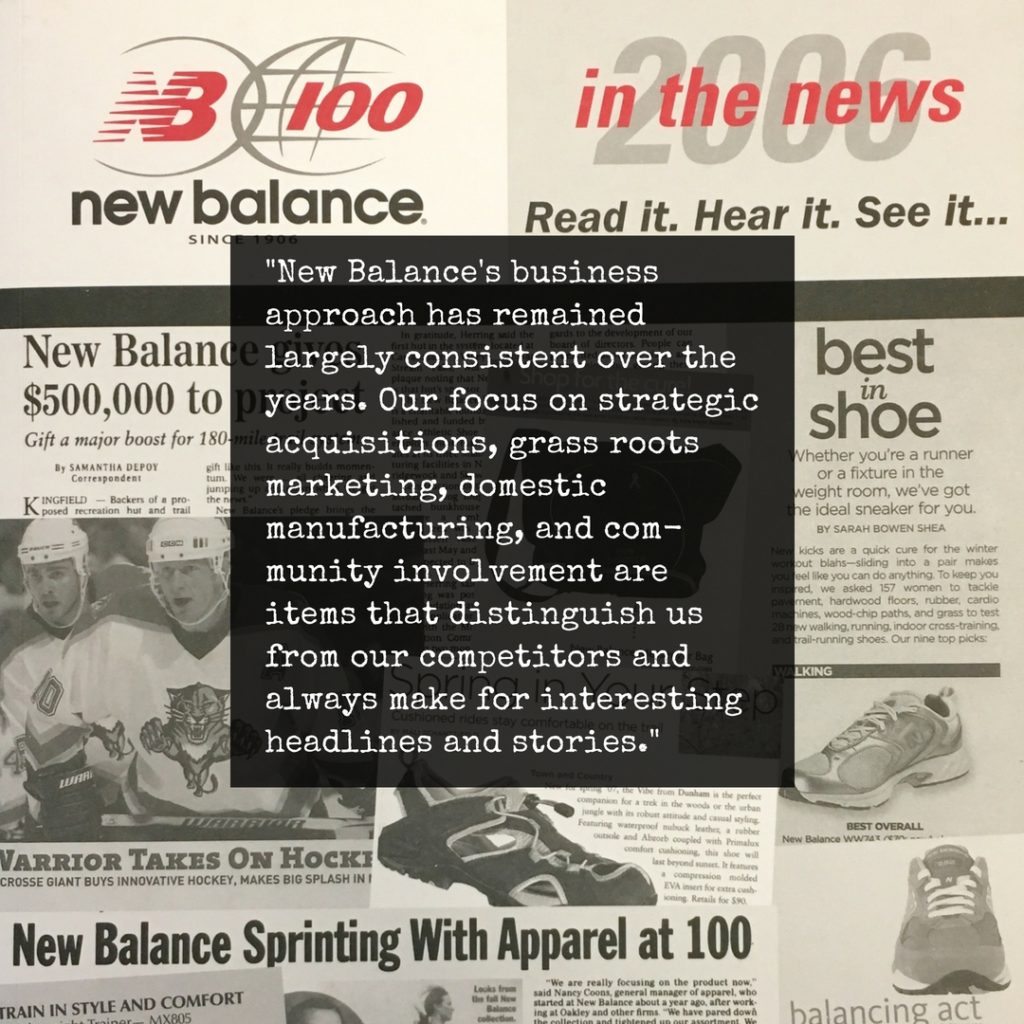 2006 was huge for New Balance as it marked the 100th year since William J. Reilly started the New Balance Arch Support Company. One of the many projects the Boston-based company undertook to commemorate their centennial was a scrapbook (really more of a mook) highlighting any and all news/media recognition that NB had received throughout the year.  Released only internally, the book starts with one small section of quotes from broadcast news (2 pages), followed by the rest of the book devoted to printed news.

The printed news is divided into sections: Centennial, Corporate, NB Zip, Footwear, Apparel & Accessories, International, Community Outreach, lace Up for the Cure, Sponsorships adn Promotions, Team NB, Retail/NB Stores, Celebrity Sightings, Licensees, Aravon, Dunham, Warrior and PF Flyers. Each of these sections has black and white copies of news stories from publications, both online and print, that either talked about or featured images of NB products; where the connection is not immediately clear, the NB-related subject matter is circled.  Neither circulation nor credibility was discriminated against, as the publications included Footwear News, Men’s Journal, FHM, the Boston Globe and Herald, the Allston Brighton Tab, Us Weekly, People, Rolling Stone, STACK Magazine, SLAM, Jane, Elle Girl and a host of others.

Sneakerature’s Take: The range of circumstances that led various news (and otherwise…) agencies in 2006 to publish something about NB was *ahem* broad; from documentation of the ill-fated Zips line (bring ’em back!), to images of Barry Bonds in drag (with his New Balance sandals circled, lest the reader thought his photo was there for some other reason), to articles about all of the amazing things that NB and the Davis family do within Massachusetts and beyond, this scrapbook style celebration of NB’s year in ’06 is, in nearly every way, shape and form, quintessential New Balance, which is to say, fucking awesome.

PreviousPrevious post: Nike 100+08
NextNext post:adidas: The Story as Told by Those Who Have Lived and are Living It